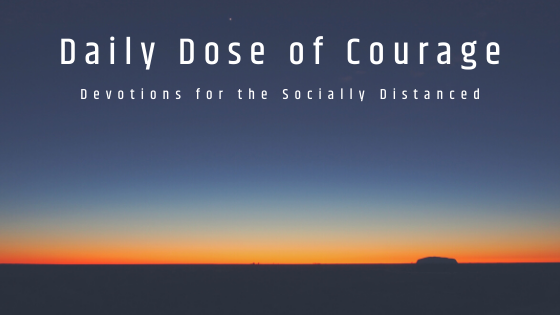 Short daily devotionals for the socially distanced. These are thoughts from my daily time in the word. I use a bible reading plan that will have me in a different section of Scripture every day.

I hope they serve to give you courage and hope. You can subscribe to receive them as a daily email at the bottom of the page.

One of the reasons that I trust the Bible is that it is so stark in its telling of human stories, even (and perhaps especially) in the stories of some of its heroes. The story of Jacob is tough to read in sections, as it tells of a self-focused deceiver who ends up winning in life and doesn’t seem to change much, although that narrative starts to change around about here in the story. The story of Dinah in Genesis 34 is tough to read because it shows that violent masculine dominance over women has always resulted in horrific abuse and that the solution to it cannot be more masculine violence.

The Bible makes no effort to gloss over human depravity. None whatsoever. But, it does offer hope in the form of a covenant keeping God who offers grace and even blessing to those who desperately know they need it, to those who reach out to His offer of grace and refuse to let go.

In Genesis 32 we find the well known story of Jacob wrestling with God/the angelic being. It is a strange story indeed, as the being is described as a man, but Jacob is convinced that in seeing the man’s face he has seen the face of God, and insists on the man giving him a blessing that only God could grant. Jacob’s life story has circled back around and focuses again on the theme of blessing. He stole the blessing of his father from his brother and he is a day away from an overdue reuniting with that brother, who he fears might still want to kill him. Jacob has realized that his stolen blessing hasn’t fulfilled him.What he has been chasing his whole life is the blessing of God’s love and covenantal grace.

You see, Jacob is changing. His confession in Genesis 32:10 shows that.

Jacob is humbled by the grace and goodness of God. He knows he could never earn or deserve it, but he deeply desires it and it is those sorts of people that God loves to meet with. And meet with Jacob he does, and they wrestle right through the night. What an image! A fallen man wrestling with the Divine in the collision of heavenly grace and a sinful man, right in the dirt of a seemingly godless desert. But God is there, in the dirt, subduing a rebellious son through embrace.

I love the posture of Jacob who refuses to let go until he receives confirmation of his blessing. He walks with a limp for the rest of his life due to that insistence, but it is a limp of grace. A limp of one who can rest assured in God’s blessing.

Friends, we are like Jacob. We are stubborn tricksters looking for shortcuts to blessings in life, and willing to take them from others if we think that will get them faster. And, we have a God who comes to meet us in the dirt, who offers us grace and blessing and promise, but only if we know we know we desperately need it. Getting to that point of desperation usually comes with a fight, and results in a limp. We have to come to the end of our efforts and find that the only thing for us to do is to hold on and refuse to let go.

I have tried so many things in life to try and secure what looks like blessing and none of it has worked. Eventually I had to get to the point where I let a gracious God wrestle me into the dirt, reminding me there of His strength and my weakness, and yet it is there, in the dirt, when I didn’t let go, that I finally got grace, and its associated limp.