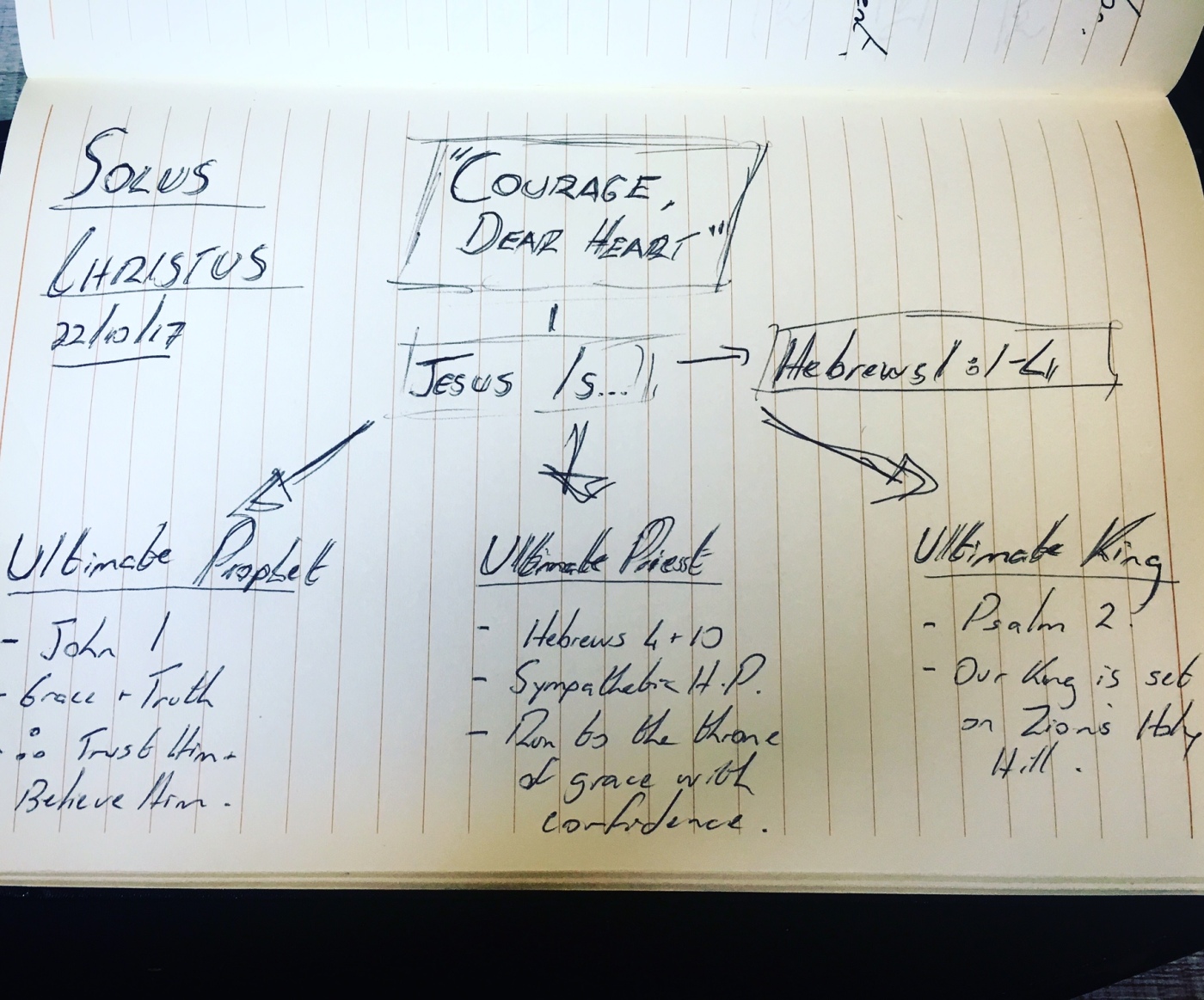 I had the privilege of preaching four services at the Downton Campus of The Austin Stone. We have been going through the Gospel of Matthew and this week’s message concluded our study in the Beatitudes. These are my long form notes below. You can find audio and video of the sermon here.

Hope you had a wonderful thanksgiving and I really hope that the after effects of tryptophan and your uncle’s unsolicited political opinions are wearing off. I also hope that you survived Black Friday with your heart intact and that the inevitable post-purchase cognitive dissonance is being gentle and yet helpful with you if you didn’t.

If you are new or visiting with us today, we are working our way – verse by verse – through the Gospel of Matthew, and we have spent the last couple of months in a bit of a series within the series, a study of the Beatitudes.

Let’s just read it so we don’t presume…

3 “Blessed are the poor in spirit, for theirs is the kingdom of heaven.

4 “Blessed are those who mourn, for they shall be comforted.

5 “Blessed are the meek, for they shall inherit the earth.

6 “Blessed are those who hunger and thirst for righteousness, for they shall be satisfied.

7 “Blessed are the merciful, for they shall receive mercy.

8 “Blessed are the pure in heart, for they shall see God.

9 “Blessed are the peacemakers, for they shall be called sons of God.

Second four – behavior as a result of that posture

And then it gets to this week’s text. We expect Jesus to wrap this up by saying, and then blessed are you when you live like this and everyone thinks you’re awesome. When the world treats you and sees you as enlightened and spiritually wise.

10 “Blessed are those who are persecuted for righteousness’ sake, for theirs is the kingdom of heaven.  11 “Blessed are you when others revile you and persecute you and utter all kinds of evil against you falsely on my account. 12 Rejoice and be glad, for your reward is great in heaven, for so they persecuted the prophets who were before you. [1]

Again, it’s upside down from what we expect, and it is strange for us to read, especially in our context. We live in a context largely sheltered from persecution.

We have worked hard to create and continue to work hard to create a culture and context of religious liberty. Which is great. But, we have struggled to hold the necessary Christian tension of what it means to be a witness of Christ in the world. We have rightly valued love and contextual savvy as keys to reaching a world from within, but I do feel that we have failed to prepare people for the spiritual reality that the Scriptures promise that the principalities and powers in the world will still hate the gospel and the messengers of the gospel. We haven’t prepped for that.

And so, we don’t experience a lot of persecution and really don’t know what to do with it when we do. So, let’s just examine three statements about what persecutions is supposed to be for the believer, taken straight from this text today. Here is where we are going.

In the Life of a Faithful Follower of Jesus…

Persecution is supposed to be inevitable

We might read this from Jesus and be, no thanks. That is cross cultural missionary stuff and I haven’t signed up for that.

Well, Jesus doesn’t give us that option. He said…

11 “Blessed are you when others revile you and persecute you and utter all kinds of evil against you falsely on my account.

That’s a when, and not an if. Following Jesus rightly should result in persecution of some kind.

So, you will only be persecuted if you are doing discipleship correctly.

20 Remember the word that I said to you: ‘A servant is not greater than his master.’ If they persecuted me, they will also persecute you. [3]

Look at how comprehensive Paul is in 2 Tim 3:12

12 Indeed, all who desire to live a godly life in Christ Jesus will be persecuted, [4]

If you are anything like me, then this is a little discombobulating, because I spend most of my life trying to avoid this, and trying to shelter my kids from it. I have a vision of what a blessed life is and it doesn’t look like being persecuted and mocked and scorned and shunned for my faith. It looks like everyone thinking I am awesome. All the time. In fact, as I have gotten older, I have realized that my number one fear is rejection. Rejection for looking foolish, or backward, or uninformed, or old fashioned. My number one fear. And I live a life where I try to follow Christ and avoid that reality all the time, and it is not the way of blessing. In fact, Christ calls it a way of woe. In the parallel text in Luke, Jesus speaks out some woes that are the opposite of these blessings.

26 “Woe to you, when all people speak well of you, for so their fathers did to the false prophets. [5]

Okay, so what do we do when our lives aren’t like this? Do we need to leave here and just pick some fights? No, is the short answer, as I will explain in the next point.

Here are a couple of things to consider:

Okay, persecution is supposed to be inevitable. Second…

Persecution is supposed to be for righteousness’ sake

Look at the text again…

10 “Blessed are those who are persecuted for righteousness’ sake, for theirs is the kingdom of heaven.

The persecution is for righteousness sake, or as it says in verse 11, on Christ’s account. In establishing what that means, it might be helpful to remind ourselves of what that doesn’t mean. Look at what Michael Glodo says about this text.

The suffering described here is not the thorns and thistles of the fall in general; nor is it persecution due to hypocrisy, judgmentalism, or just general obnoxiousness.It is certainly not the imagined persecution of heightened sensitivity that has more to do with identity politicsthan the cost of discipleship. We dare not trivialize persecution in that way when brothers and sisters are being imprisoned by oppressive regimes and dying at the hands of extremists. The suffering that is blessed here is suffering for righteousness’ sake—being persecuted for doing the will of our Master.[7]

He raises some essential points. Christian persecution is not…

Jesus was the fulfillment of righteousness and everywhere he went, people wanted to kill him.

He was, and we will be. This is why we would do well to consider and count the cost of following Christ. I haven’t experienced a lot of persecution as a believer, but I have been mocked, I have been reviled, I have lost friendships whenever I have pressed further in to what it looks like to follow Christ faithfully.

Okay, persecution is to be expected, and is for the sake of Christ. Lastly…

Persecution is supposed to be cause for rejoicing

Jesus says, “when this happens, rejoice!” Why? Three quick reasons amongst others.

Persecution Unites us with Christ

We get to experience the nearness and fellowship of Christ in a special way when we are persecuted for our love of Him. Paul said it this way in Philippians 3 when he spoke of his greatest desire…

10 that I may know him and the power of his resurrection, and may share his sufferings, becoming like him in his death,11 that by any means possible I may attain the resurrection from the dead. [8]

Persecution Connects us with the saints of old

Jesus ties it back to the prophets of old. He reminds us that it has always been the case for people who follow God boldly. The world won’t get it. Sometimes the people of God won’t get it. The prophets were usually persecuted by the covenant people.

I love the reminder in Hebrews 11…

36 Others suffered mocking and flogging, and even chains and imprisonment. 37 They were stoned, they were sawn in two, they were killed with the sword. They went about in skins of sheep and goats, destitute, afflicted, mistreated— 38 of whom the world was not worthy—wandering about in deserts and mountains, and in dens and caves of the earth.

39 And all these, though commended through their faith, did not receive what was promised, 40 since God had provided something better for us, that apart from us they should not be made perfect. [9]

What a thought. Jesus says not only do you get to see the Kingdom of Heaven, but you get reward when you get there.

Get mocked now. Get a crown then.

Get ridiculed now. Rule over cities then.

Lose out now. Win forever then.

Have people turn from you now. Stare in the face of your King then.

It’s worth it. Look at how the Apostles responded to beating and imprisonment in Acts 5:41.

41 Then they left the presence of the council, rejoicing that they were counted worthy to suffer dishonor for the name.[10]

Will we be counted worthy?

And that new life is marked by mercy, enjoys purity, pursues peace and endures persecution with a blessed contentment of being citizens of the kingdom of heaven.